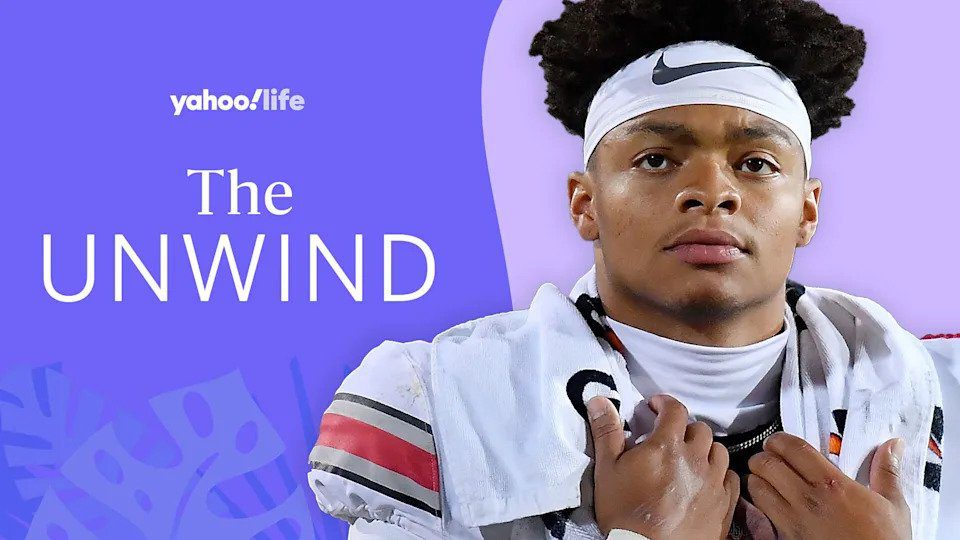 The Unwind is Yahoo Life’s well-being series in which experts, influencers and celebrities share their approaches to wellness and mental health, from self-care rituals to setting healthy boundaries to the mantras that keep them afloat.

There’s just a little over week before the Chicago Bears preseason kicks off, which means that NFL rookie Justin Fields is days away from making his official debut as a Chicago Bears quarterback. Fresh off a Big Ten championship and a trip to the finals in his final year at Ohio State, the first-round draft pick has all eyes on him as the season nears.

That pressure could make others crumble, but the unflappable Fields is hard to intimidate. Here, the 22-year-old opens up about face masks, turning losses into learning moments and why he’s feeling better than ever since switching to a plant-based diet. (The football star was this week announced as an investor and ambassador for PlantX, which offers plant-based pantry staples and a meal delivery service; Fields himself is a fan of their vegan chicken nuggets and burgers.)

How do you protect your mental health?

Just giving yourself a mental break; [find time] in the day to push all your stressful things to the side and just give your mind a break and give your mind time to relax. That’s very important, to get your mind off things, and once you do that, you can come back with a fresh, clear mind.

Do you have any self-care rituals or anything you do to reward yourself after a game?

I’m not going to lie. I don’t really have any self-care [practices]. I might have a little self-care day — like a spa day, really — where I really just have like a face mask on and am just chilling with some wine or something like that. That’s pretty much about it; I don’t necessarily reward myself.

Just a face mask at home?

Yeah, face mask at home. Turn on a movie and just relax.

Being a quarterback, especially, you must be under a lot of pressure. How do you deal with that? Do you have any strategies for tuning all that stuff out?

I think I used to struggle with it more, but now I’m used to the press and used to always kind of being under the spotlight. I wouldn’t call it necessarily pressure for me, because what others call pressure, I call goals. I call it expectations for myself. I expect myself to do what everybody thinks I can do, or do whatever everybody thinks I’m under pressure in doing. I’m not really under pressure because that’s just what I think that I’m supposed to do and what I think I’m capable of. So as long as I work hard … on and on off the field, I think I can achieve those goals.

Like anyone else, you’ve had setbacks in your life. Even losing a game can be, on a public level, can feel like a big deal. How do you deal with those tough times?

I think sometimes those tough times are needed. I just use those tough times as motivation and I kind of look at the situation as a positive thing. For example, last year I probably had my worst game at Ohio State. I threw, like, three interceptions, but I turned that into a positive. I pretty much told the media, “I’m glad this happened to me. That just means I need to go back and work harder.” And then the next time I ended up playing really well.

Sometimes the negatives turn out some positives. I figure there’s been so many negative things that have happened in my life that turned into positives that I’m not necessarily so down on myself when those things happen. Of course you’re going to be sad or you’re going to be not feeling great about it, but [I focus on] not quitting and keep working and keep getting better. I think the most important thing is just having confidence in yourself and believing in yourself that you can accomplish what you want to accomplish, everything will take care of itself.

You and your family started eating a plant-based diet during the pandemic. What got you started, and what sort of impact have you’ve noticed, especially as an athlete?

Basically it all started with my dad and my stepmom and my sister; they tried this 28-day plant-based detox. At first I wasn’t planning on doing it, but they talked about it a little bit and we watched the movie The Game Changers on Netflix [a documentary on performance-boosting diets for athletes]. After that, I pretty much said, “You know, I’m just going to try it. Why not?” After that 28-day period on, I felt way better within my body; I felt stronger. I had lost like 2 pounds but not necessarily muscle. I just felt great, I felt fast, I felt more energized. I just woke up every day with more energy and [with] my workouts, I wasn’t getting as tired. After that 28-day period, I said, “I’m going to stick with plant-based and see how it works out for me.” From that point on forward, it’s been great. I’ve enjoyed it a lot.

What stresses you out?

The biggest thing that stresses me out is when, of course, I don’t perform as well as I wanted to, or things don’t necessarily go my way. Maybe if I have a lot of things on my plate in one day and they’re not running smoothly.

And conversely, what brings you joy?

Being with my family brings me joy, just spending time with them. And, of course, having fun and just enjoying life; doing different activities, like going out on the lake, going out on the ocean on a boat and relaxing. Spending time with family and friends, that’s one thing that definitely brings me joy. That’s what we can’t get back, is time, so I’m definitely cherishing every moment with the people that I love.

Do you have a mantra or piece of advice that you regularly refer to?

I live by the saying “everything happens for a reason.” I’ve had a lot of things that I thought were going to happen in my life a certain way, [but[ turned out a whole different way. But at the end of that situation, it turned out better than I could’ve ever imagined. … No matter what happens in your life, no matter what you’re going through, just know that you’re going through it for a reason. As long as you can push through it, and as long as you keep believing in yourself, there’s always light at the end of the tunnel.

This interview has been edited for length and clarity.