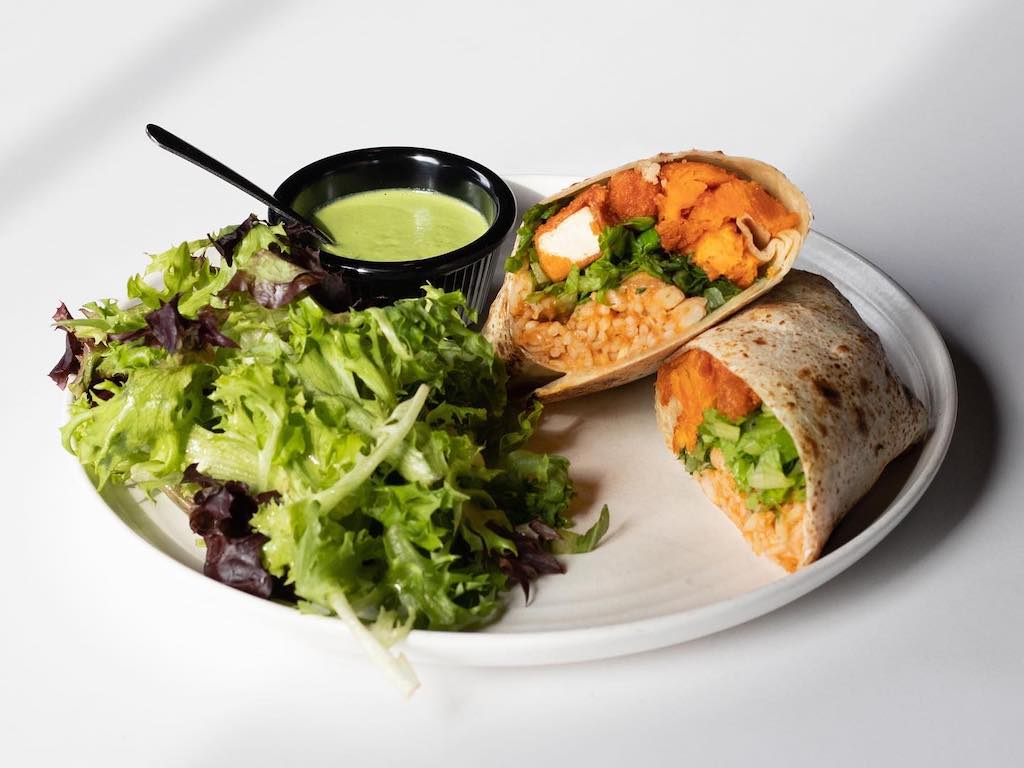 A miniature version of Plant City, the world’s first 100% vegan food hall masterminded by plant-based celebrity chef Matthew Kenney, has just opened in Middletown, Rhode Island in the U.S. Called Plant City X, the new location operates as a drive-thru that serves everything from veganised fast food classics like burgers and fries to nutritious salads and smoothies.

Expanding into the Newport area, Plant City, the world’s first vegan food hall and marketplace that opened doors in Providence in 2019, now welcomes Plant City X as its latest sister establishment. Operating as a miniature drive-thru version of the original Plant City, no doubt with coronavirus social distancing and safety measures in mind, the new location will also house casual outdoor and indoor dining areas where customers can enjoy a variety of dishes from its chef-driven 100% vegan menu.

Among some of the dishes featured on the menu at Plant City X includes a variety of burgers, such as truffle and guac, to “chik” sandwiches and fresh fare like kale caesar salad, avocado toast and acai berry fro-yo parfaits. The location will be open daily for breakfast, lunch and dinner, and will also be available for delivery or pick-up, in addition to existing takeaway, dine-in and drive-thru options.

Kim Anderson, co-founder of Plant City, previously said in an interview with local publication What’s Up Newp that the offerings are designed to be a “single, scaled-down menu that’s true to Plant City’s core concept: delicious, beautiful, plant-based food made from scratch.”

“All of the items planned for the menu will be versions of current best sellers in Providence, but at price points more in line with fast food. We want to be competitive as a fast-food option on the island. We want to provide a fast-food experience but in a re-imagined, plant-based environment,” Anderson added.

The opening of Plant City X comes as plant-based dining continues to boom across the U.S. and globally, as mainstream consumers hop on board to choose healthier, more sustainable and crisis-resilient foods.

We want to be competitive as a fast-food option on the island. We want to provide a fast-food experience but in a re-imagined, plant-based environment.

The trend has been set off by a chain of events amid the coronavirus pandemic, especially in the U.S. where the worst slaughterhouse outbreaks have been recorded, raising alarm bells over the safety of meat and the industry’s vulnerable supply chain.

“Plant-based food continues to be on the rise as people adjust their diets in favour of meat- and dairy-free dishes,” said Plant City X in their announcement of the launch last year.

Plant-based food continues to be on the rise as people adjust their diets in favour of meat- and dairy-free dishes.

“Plant City X is responding to increased demand for high-quality plant-based food, with two thirds of people reporting eating less meat in recent years. The company’s mission is to enable people to live a plant-based lifestyle.”

Other plant-based businesses in the U.S. have also taken the opportunity to expand their presence in response to surging demand, such as Canadian vegan e-commerce platform PlantX who have recently entered the market and are launching a brick-and-mortar storefront in San Diego.

VEDGEco, a Hawaii-based 100% vegan bulk wholesale shop dubbed as the plant-based version of Costco, has also recently increased its delivery coverage to all states nationwide.