UPTOWN — Uptown’s newest grocery store is rebranding to a vegan-only food market after being acquired by a Canadian health food company.

Peter Rubi was sold to the vegan food startup PlantX and is being rebranded as XMarket Uptown, the company confirmed. The grocery store at 804 W. Montrose Ave. and its sister location in Plainfield were sold to PlantX in December and the rebranding at both locations is underway.

The Peter Rubi stores are being transitioned to offer entirely plant-based products, including wines and beers. In Uptown, the store will see new features including a cafe and space for programming and events, said Alex Hoffman, chief marketing officer for PlantX.

Both stores will remain open during the rebranding.

PlantX is a plant-based lifestyle and product company. Founded in 2019, it offers online ordering and delivery, and has opened two XMarket locations in California and one in New York, plus outposts in Canada.

PlantX bought Peter Rubi for $1.2 million plus stock options, the company announced in a press release. With the expansion to Chicago, PlantX now has a presence in the country’s three biggest markets as it seeks to scale up a vegan-only, high-tech food operation, founder Sean Dollinger said in a statement.

With the acquisition, some changes are in store for the Peter Rubi Uptown location.

Peter Rubi is a health-conscious market that carries highly curated food items with no preservatives. It did not stock meat or dairy.

The Uptown location of Peter Rubi opened in September, taking over a prime storefront in the Eight Eleven Uptown building that was once slated to hold a Treasure Island grocery store. It was the second Peter Rubi location after the flagship Plainfield store opened in 2012.

The Uptown store opened despite owners John and Maria Graves putting their Plainfield location up for sale just months earlier. After some concern among customers about the store potentially closing, the Graves’ said the store would remain.

John Graves did not return requests for comment this week. Graves will still have a hand in operating the Chicago XMarket locations, PlantX said in a statement.

Peter Rubi’s products are being overhauled to bring in many of the 10,000 products PlantX sells, Hoffman said.

XMarket Uptown will sell grocery staples plus vegan sandwiches crafted by celebrity chef Matthew Kenney, who opened the restaurant Althea in Gold Coast. A coffee shop will be added to the store, selling Portfolio coffee products.

New “XMarket” signs are expected on the Uptown location next week, Hoffman said. The beer and wine section will be added later this year. 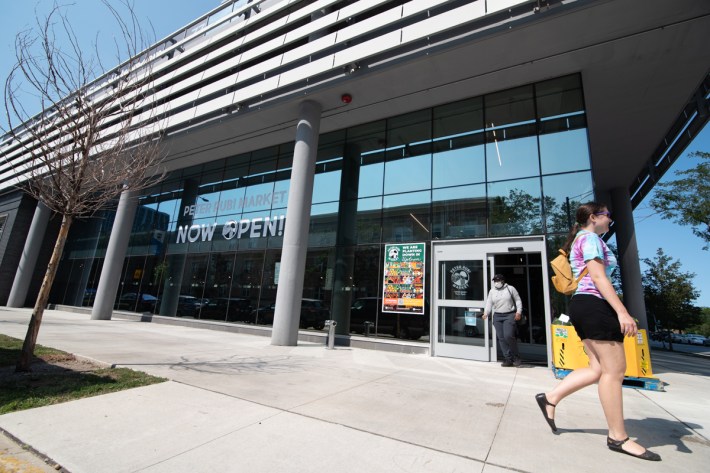 The store will have space for demonstrations and events, with plans for food sampling, group workouts and seminars on plant-based living, Hoffman said.

The store will also operate as storage and fulfillment centers to aid in PlantX’s online shopping platform.

With the new stores, PlantX is hoping its XMarket will be the foremost vegan shopping destination in the city, its founder said in a statement. PlantX has also announced a partnership with Bears quarterback Justin Fields, who is vegan.

Click here to support Block Club with a tax-deductible donation.